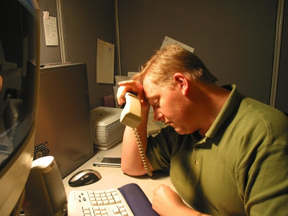 The Law Office of Troy D. Krenning, LLC is a law firm that is dedicated to helping people who are in distress. In the current economy so many Americans face the difficult financial choices of paying what they can to maintain their household or pay off an abusive debt collector in order to stop being harassed. You do not need to make this choice. We can stop the harassment today! You are not alone and should not be ashamed of the situation that you are in. The abusive debt collectors rely on your fear and intimidation and know that often people will not seek out qualified legal help because they are ashamed.

Debt collection is a legitimate business, it is the abusive, rude and out of control debt collectors that find themselves on the wrong side of a lawsuit. The Law Office of Troy D. Krenning, LLC will take action to protect you and your family and make the debt collectors pay if they have violated the law. We are not intimidated by the bill collectors. Our commitment is to serving the needs of our clients, at no cost, and protecting the rights of those who are in distress. We offer free, confidential consultations and will work fast to stop the abuse, harassment and see that you are compensated for the debt collectors violations of federal law. Call us today and we will get to work for you.

In 1977 the United States Congress passed the Fair Debt Collection Practices Act (FDCPA). This one piece of federal legislation was designed to stop the abuse, harassment and fear tactics used by bill collectors, often on people already in distress. If a bill collector violates this law, YOU have a right to bring a lawsuit against the individual bill collector and his/her employer bill collection agency. It does not matter if the debt is valid or not. You could be awarded up to $1,000 in statutory damages by the Court for the violations of the bill collector and awarded all reasonable attorney fees and costs associated with bringing your action.

Statutory damages are those damages which will be awarded by LAW for violations of the FDCPA that do not require showing of actual damages. Actual damages can also be awarded by the Court. Some examples of actual damages that have been awarded in FDCPA claims include economic loss, job loss, emotional distress, depression, damage to your economic status, damage to your relationships and actual out of pocket expenses incurred as a result of illegal bill collector behavior. You may be entitled to much more than the $1,000 statutory damages if indeed you have suffered and can prove actual damages.

Contact the Law Office of Troy D. Krenning, LLC to discuss the particular facts and circumstances of your case.

These are only a SMALL sample of FDCPA violations.

Please contact the Law Office of Troy D. Krenning, LLC to discuss the facts of your case.

If you believe that you have been a victim of an FDCPA violation write down the date, time and circumstances of the contact. Click here for a FDCPA Violations Call Log that you may wish to use to record violations of the FDCPA.

How Much Will My Legal Fees Cost?

The Law Office of Troy D. Krenning, LLC., will evaluate your case for free. This may be done in a telephone consultation or an office consultation. It may take 5 minutes or it may take hours. Regardless of how much time we spend meeting with you, this consultation is free.

If, after a consultation we are able to determine that you have been the victim of illegal acts by a bill collector, The Law Office of Troy D. Krenning, LLC., will initiate a lawsuit against the bill collector, his/her agency and anyone else that we believe may be liable to you. The Fair Debt Collection Practices Act (FDCPA) authorizes the Court to make the bill collector who violated the act, pay reasonable attorney fees and all costs associated with bringing the lawsuit. The FDCPA allows for statutory awards for up to $1,000 to the plaintiff plus all reasonable attorney fees and costs of litigation. Many cases of FDCPA violations have damages that are above and beyond the $1,000 statutory cap and  the Law Office of Troy D. Krenning, LLC will fight to recover all that is due to you! Although you will not be held responsible for attorney fees unless we are able to recover, you may be liable for other costs.

You probably do! But you are not alone and the fact that the debt may be valid is not a free pass by a bill collector to harass, intimidate, threaten or annoy you and your family. Did you know that the amount of credit card debt that is owed by the average household in the United States is $15,788? A total of approximately 576,000,000 credit cards are in use in the United States. The unemployment rate in the United States is near 10% which is the highest it has been in over 25 years. Credit card companies have used the law to raise their interest rates to as much as 30%, add on high fees for late payments, close accounts on long standing customers who have never been late or missed a payment. In June of 2009 Congress spent 1.1 TRILLION dollars of TAXPAYER MONEY to rescue the banks and financial institutions. Bank of America received $52.5 BILLION, Citigroup received $50 BILLION, Wells Fargo received $25 BILLION.

So, yes, you probably do owe the money but you are not alone. And the Fair Debt Collection Practices Act regulates the way bill collectors behave and act. You may owe the money that they are trying to collect, but they must FOLLOW THE LAW in their dealings with consumers. Bringing a federal lawsuit against an unethical bill collector will not eliminate the debt, but it may entitle you to up to $1,000 or more for a bill collectors illegal behavior.

The Fair Debt Collection Practices Act (FDCPA) is Federal law. This very powerful law protecting consumers was passed by Congress in 1977 after a determination that there was "abundant evidence of the use of abusive, deceptive, and unfair debt collection practices by many debt collectors." The law empowers citizens to bring a federal lawsuit against bill collectors and debt collection agencies for any violation. In general, a bill collector must treat you with respect, dignity and be truthful during their contact with you. Below are the most common violations that bill collectors commit:

Read about our what we practice.

Contact us to see how we can help you.